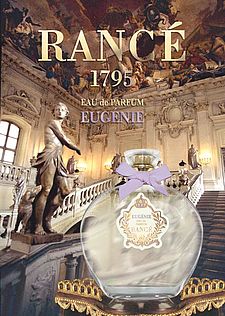 At the beginning of 1600s, the Rancé family produced perfumed gloves for the French aristocracy in Grasse, France. In 1795 Français Rancé turned entirely to perfumery. His innovative spirit led him to create extremely refined and modern perfumes. He soon became the Napoleon's favorite perfumer, and created Le Vainqueur, L'Eau d'Austerlitz and Gloire a l'Aigle Français for the emperor. In honor of Josephine Bonaparte, he created L'Impératrice which he presented to the empress in a precious Sevres porcelain box. The last example of this precious porcelain object d'art is kept in the Rancé archives.

Several generations of Rancé have followed, at the end of 1800s Alexandre Rancé moved to Milan, Italy. At the head of the family firm is today his granddaughter, Jeanne Sandra Rancé with her son Jean Alexandre Maurice Rancé. Today, Rancé 1795 products are offered in the most prestigious department stores and in the top perfumery shops worldwide with complete assortments and prestigious displays in more than 60 countries.