The brand owes its name, known until 2006 as Mühle-Pinsel, to Otto Johannes Müller. In 1945, a signet in the form of a mill adorned the simple bristle brushes, which were made in a washhouse. The idea of founding a company suggested itself as the craft of brushmaking is at home here in the Erz Mountains. The products left Stützengrün on horse-drawn carts and even then, as today, they were shipped all over the world.

During the economic miracle years, stylish shaving accessories came back into fashion. In the mid-1950s the idea was born to make a particularly exclusive brush made of badger hair with a mother-of-pearl handle. In 1968, Hans-Jürgen Müller took over the management of the family business. In 1973, the company was nationalized and became part of the state-owned enterprise Bürstenwerk Schönheide, which produced inexpensive goods mainly for the eastern European market. Their quality was still acknowledged, but the design orientation and individuality of the brand had to take a back seat. 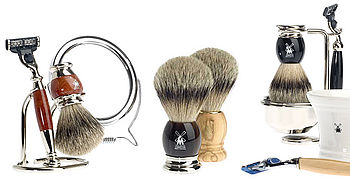 The company
The first shaving brushes were made in Stützengrün in 1945. Since then, the location has been consistently expanded and further developed. Today, Hans-Jürgen Müller GmbH & Co. KG is an efficient, innovative company which combines industrial expertise with a high degree of skilled craftsmanship. The private brand Mühle is the only manufacturer worldwide producing a superior full product range for wet shaving. The company is equally successful in the distribution of selected international brands for body care and beauty.

Expertise and craftsmanship
The high quality standards of Mühle are based on the product development, the selection of excellent materials and their traditional processing. Design series from Mühle are products of its own manufactory, and made by specialists. Each individual component profits from their craftsmanship. The result is beauty and durability.

Technical perfection for large volumes
In the industrial production Mühle employs modern technologies to supply broader target groups with an attractive range of products. Every year, around 1.5 million brushes are made, mostly using automated processes. In this way, Mühle ensures consistent quality and the punctual delivery of large volumes.

For serial production highly efficient machinery is used, some of which was developed by Mühle. Specialized machines partition the hair or bristle material precisely, then bundle it before it is glued into position. The surplus hair is subsequently combed out and the shape slightly trimmed.

Promise of quality for unique pieces and serial products
A wide variety of materials is used for high-quality handles and accessories. No other manufacturer offers a comparable wealth. Mühle devotes its experience, dexterity and love for detail to all the products.